~Good. No DJ, as issued. Light to moderate shelf wear to covers/corners; satisfaction guaranteed. Signed By Author.Thomas D. Howells was born July 21, 1912 in DuQuoin, Illinois. He received Bachelor?s and Master?s of Arts degrees from the University of Chicago. He also attended the University of Southern Illinois and the University of Michigan.He joined the Whitman College faculty in 1938, and was promoted to the rank of full professor in 1957. He retired in 1978 but resumed teaching as an adjunct professor from 1981 to 1987. He served as Director of Curriculum from 1954-1965, Chairman of the English department from 1966-1974 and Chairman of the Faculty from 1974-1976.In 1984, Professor Howells was presented an honorary Doctor of Letters degree at commencement. He was honored then as a ?distinguished teacher, caring colleague, institutional as well as literary critic and writer.?Professor Howells was one of five founders of the Walla Walla Little Theatre and was Chairman of the Board of Trustees for the Walla Walla Public Library.His poetry, articles and book reviews were regularly published in literary magazines. He also co-authored a history of the Walla Walla Symphony, Bringing the World?s Best Music. A collection of lectures, Gods and Heroes, was published by Northern Kentucky University following his appearance there in 1981. Howells died in January 1991.

In Tender Consideration: Women, Families, and the Law in Abraham Lincoln's Illinois 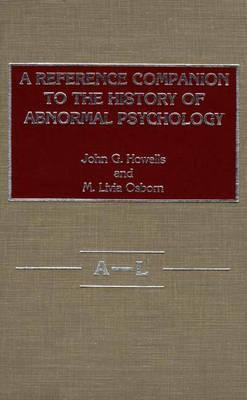 A Reference Companion to the History of Abnormal Psychology [2 volumes]