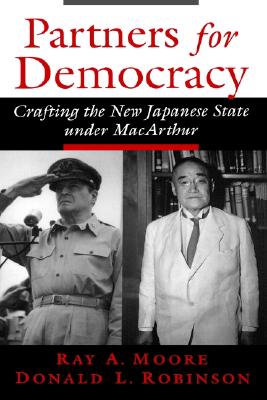 Partners for Democracy: Crafting the New Japanese State under MacArthur

In 1945, Japan surrendered unconditionally to the United States and its allies, thereby planting the seed from which would spring one of the world's most successful and stable democracies. In an age when democracy is often pursued, yet rarely accomplished, in which failed democracies are found throughout Africa, Latin America, and Asia, Japan's transformation from an utterly defeated military power into a thriving constitutional democracy commands attention.
It has long been assumed that postwar Japan was largely the making of America, that democracy was simply imposed on a defeated land. Yet a political and legal system cannot long survive, much less thrive, if resisted by the very citizens it exists to serve. The external imposition of a constitution does not automatically translate into a constitutional democracy of the kind Japan has enjoyed for the past half-century. Apparently Japan, though under military occupation, was ready for what the West had to offer. Ray A. Moore and Donald L. Robinson convincingly show that the country's affirmation of democracy was neither cynical nor merely tactical. What made Japan different was that Japan and the United States-represented in Tokyo by the headstrong and deeply conservative General Douglas MacArthur-worked out a genuine partnership, navigating skillfully among die-hard defenders of the emperor, Japanese communists, and America's opinionated erstwhile allies. No dry recounting of policy decisions and diplomatic gestures, Partners for Democracy resounds with the strong personalities and dramatic clashes that paved the way to a hard-won success.
Here is the story of how a devastated land came to construct--at times aggressively and rapidly, at times deliberately and only after much debate-a democracy that stands today as the envy of many other nations.

Partners for Democracy: Crafting the New Japanese State under MacArthur